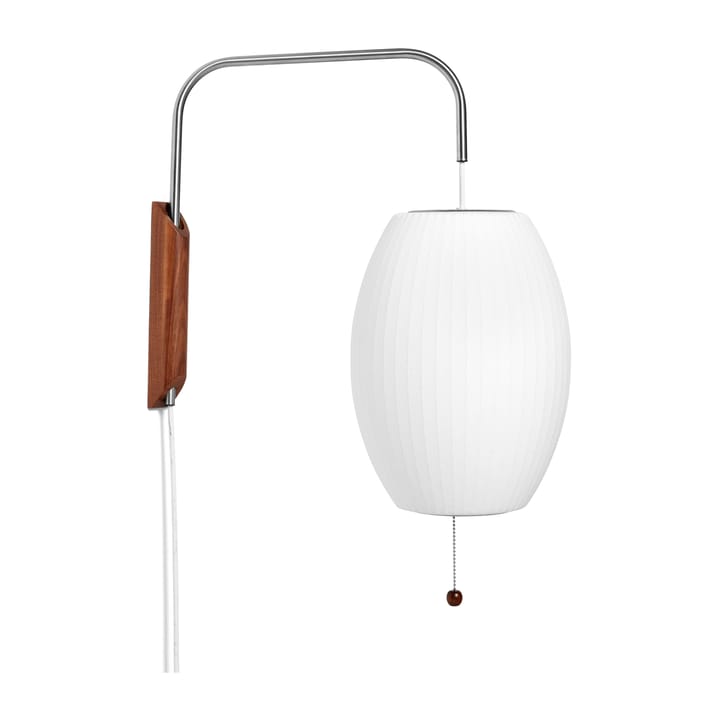 Off white
$793$882.50Price excl. VAT
Only a few left, Available for immediate shipping
Free shipping to United States
Description
Nelson Bubble Cigar wall lamp from Hay is designed by George Nelson and is a light and airy wall mounted lamp with bracket made from walnut wood with details in nickel. Thanks to the steel arm, the versatile wall lamp can be adjusted in several directions. Under the lampshade hangs a decorative pull switch in the shape of a ball chain with a matching walnut boss. The American designer George Nelson designed the pendant Bubble in 1947 after finding inspiration from a set of Swedish silk-covered hanging lamps. The originals were highly complex to produce, so Nelson developed his own version to simplify the process. The idea for Bubble's design came after he saw ships stored under a thin protective fabric, which was applied over the ships with a special spray. Within a day, Nelson had created a round metal frame and contacted the company that manufactured the spray. The rest, as they say, is history. The result was the Bubble, a lamp that appeared to float and gave off a beautiful diffuse light. The design was a success and has since been one of George Nelson's most iconic lamps. The bubble pendant lamp is available in a number of different shapes and sizes and also as a wall mounted lamp.
Facts
Reviews
About HAY
Customer service